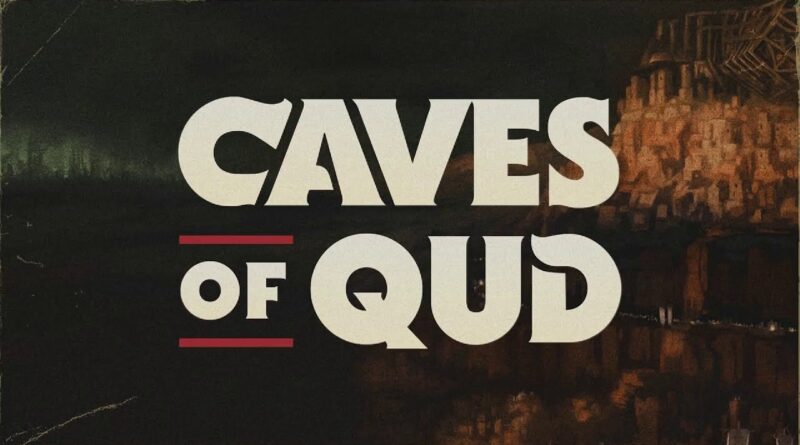 Caves of Qud is one of the most promising modern-day roguelikes released and will only be surpassed when Dwarf Fortress gets its long-awaited Steam release. However, with a release date of “time is subjective”, Caves of Qud will still remain the most-played roguelike in my Steam inventory.

These three features all combine into a mishmash game that gives high replayability, a huge emphasis on punishing player mistakes, and a ton of fun. Caves of Qud is no different and features (for the most part) all three of these. The only thing it is iffy on is the procedurally generated world, but it makes up for that with the random generation that goes on inside each tile on the world map.

Caves of Qud features the same staggeringly vast map every game with tiles that are always the same. For instance, the town you start in, Joppa, will always have the same merchant in his shack, the same watervine farmers, and the same cat Ctesiphus. However, the items you can steal out of the chests, the merchant’s inventory and other things are all randomly generated. The same goes for other constant tiles in the world, of which there are a few. That’s not to say the world isn’t random – oh no far from it.

On your way to the Six-day Stilt, you’ll encounter random enemies, various randomly generated biomes, and random loot! The world is in ruins, jungles slowly encroach over a part of the map, the West is a massive salt flat with immensely powerful salt krakens roaming its desert. Plants will try to kill you and creatures lurking in the waters will rip your arm off. In the beginning, death can occur fairly quickly. The player has to make sure they are paying attention to their screen and what’s on it.

Every creature, character, living thing is part of a faction and each faction has its own likes and dislikes of the others so be careful who you ally yourself with! The world is immense and rich with a ton of procedurally generated lore. Every game starts on the same map and tile, but how it ends and what you find will always be random.

Caves of Qud is a turn-based game meaning you move, then everything else on the map moves. You attack an enemy, then they attack. It’s fairly simple but there are so many tactics, abilities, even mutations at your disposal that the combat always feels unique with its limitless possibilities.

Are your enemies standing in pits of tar? Use your mental powers as an esper to set the tar on fire! Is there a room full of baddies with one hallway in or out? Lay a mine using your tinkering skill and lure them out! Need some distance to fire bolts of light with your mind at your enemies? Create a forcefield and block them off! These are just a few of the many choices you have when it comes to combat.

Did those mutations get your attention? Well good because that’s a huge part of this game. What’s a post-apocalyptic wasteland without mutations? At the start of the game, you get to either be a True Kin (normal) or a Mutant (…mutant). You also get to pick castes and other “classes” that dictate your starting attributes, skill levels, and abilities.

Like most roguelikes, Caves of Qud features a semi-colorful 2D tileset. The graphics can be described as a sort of retro tileset, but don’t let it put you off! Once you’ve sunk an hour or two into the game, the dots, lines, and shapes on screen all start to make sense – almost like you’re reading the Matrix code.

The lack of high-quality 3D graphics adds to the atmosphere and immersion of the game. It lets you be in control of what’s going on in the game. I often find myself visualizing the combat in the game and time flies by when I play. I become so immersed in the action, the lore, the quests that time slips by and then its 3 AM and I have to go to work in four hours.

The soundtrack to the game is pretty stellar and one aspect I find most people don’t talk about. Just like the graphics, it adds to the immersion – but if you’d rather not listen to it simply shut it off in the settings and play your own music.

Overall, Caves of Qud is a great game, one I would recommend to anyone with an interest in roguelikes. If you’re a fan of Dwarf Fortress, Dungeons of Dredmor, or Tome, then this is a game you have to try. If you have never played a roguelike before, I’d suggest picking this up on sale and giving it a shot. It may be daunting in the beginning, dying to Snapjaws or getting chased by Slumberings, but eventually, you will learn how to survive in the harsh wastes of Qud. Hope you enjoyed my review of Caves of Qud, leave your own thoughts on the game below.