Wube Software has capitalized on the success of Minecraft’s industrial and build craft modifications by developing a construction and management simulation game masterpiece, Factorio. An instant success with its early access release in 2016, Factorio quickly became a hit and critically acclaimed. An open-world game following an engineer that emergency lands on another planet, players use real-time strategy to collect materials and build industry in order to build a rocket to escape. Even more exciting, Factorio also includes combat to protect your factory! It’s no wonder people are searching for more games like it. Are you in search of a similar game to scratch the itch? Here are 10 games like Factorio.

Astroneer is a game that is highly similar to Factorio, and also allows the player to shape worlds. Another open-world game, Astroneer, developed by System Era Softworks, is set in outer space and the player is tasked with creating habitable planets. Like Factorio, the player collects materials that will eventually lead to upgrades for their colonies. This game includes all of the fun aspects of Factorio with the added excitement of populating the galaxies! Astroneer is an instant hit and earns 9/10 stars on Steam.

While not as open world and more puzzle solving, Infinifactory is sure to be appreciated by any Factorio fan. Like Factorio, a distressed human is attempting to flee another planet. This game, however, involves being abducted by aliens! Players are tasked with finding specific types of blocks in order to craft materials to escape. Like Factorio, these tasks are made simpler with industrial assembly lines. Developed by Zachtronics, and released in 2015, Infinifactory earns a 9/10 rating on Steam.

Also developed by Zachtronics, SpaceChem was released in 2011. SpaceChem is a puzzle game that requires players to make chemical molecules with an assembly line. While more science-minded than Factorio, SpaceChem relies on the same mechanics of crafting while using industrial means. In SpaceChem, players program robots to deliver chemicals in a certain order to create chemical reactions. If you enjoy puzzles and resource mining, check it out! People love this game! It deserves the 10/10 star rating on Steam.

Like Factorio, Banished, developed by Shining Rock Software, requires you to manage resources with the added excitement of growing and managing a society of outcasts. Banished also includes citizen management– citizens require certain things in order to be happy, and you require citizens to be happy in order to gain resources. Another aspect of management is the life and death of your citizens. As your town grows, you have to deal with real-life problems such as population control. Can you achieve the required balance? Banished receives 9/10 stars on Steam.

Developed by Robotronic Games, Gnomoria is another game like Factorio. You mine, chop, collect materials to craft and build items in the game. Like the previous game on our list, Banished, Gnomoria also includes a society to be managed– a society of Gnomes! Mine, craft, and build your settlement to the top! Gnomoria is a great choice for Factorio lovers and earns 7/10 stars on Steam. We also highly recommend this game if you are a fan of another famous game, Dwarf Fortress!

To many Factorio fans, Eve Online might be a bit of a stretch to make this list for similarity. But one thing both of these games have in common: addiction capabilities. Many Factorio fans in forums discuss how much time they put into both games. Eve Online is an MMORPG, by CCP Games, but you can join different professions like mining, exploration, and manufacturing– all of the likable elements of Factorio. Join in on the endless possibilities of Eve Online! Eve Online boasts a cult-like following and 7/10 stars on Steam.

Developed by Introversion Software, the next game on our list combines the player into an architect and manager of a prison. Prison Architect includes building prison cells, facilities, and utilities; hiring staff such as wardens and workers; managing prisoners with schedules; and more! Like the other games on our list, the player is responsible for the prisoner’s happiness as well as creating a functional prison world. Prison Architect is sure to feed the need for management and earns 9/10 stars on Steam.

9. Minecraft, with IndustrialCraft or BuildCraft mods

It might be an obvious choice, considering that the popularity of these mods in Minecraft were the original influences on Factorio, but it’s no surprise they show up on this list. Adding the IC or BC modifications creates a totally different game with more industrial aspects. Considering the long term playability of Minecraft, it’s a good option for people looking for Factorio style games. We don’t think we have to convince anyone that Minecraft is a great game! It’s been a hit with all ages for over a decade! We highly suggest you head on ever to TechnicPack.net and download the client and immerse yourself in a whole new experience. The TechnicPack client is a goldmine for custom modpacks that aim to make Minecraft into something so much more than it already is.

Factorio is making its own list?! At the end of the day, there is no game more like Factorio than Factorio itself. Being a game that was developed from mods, the developers were smart enough to include the ability to mod Factorio. You can download Bob’s Mods or Angels Mods, or both, and Factorio can feel like a brand new game! With these mods, enemies become a bit harder to defeat and some resources become longer to process. This aids the length of playability for the game and makes achievements more difficult to receive. And with the added challenge, who needs a new game?

We hope you found a new game to scratch that itch Factorio may have left you with after reading our Games Like Factorio post! It can be hard to find a replacement, but we think any of the above games can fill that hole.

Games Like Mount and Blade You Should Have Already Played 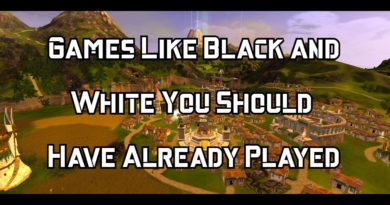 Games Like Black and White You Should Already Have Played

Games Like Mount and Blade You Should Have Already Played

The Mount & Blade series, developed by TaleWorlds Entertainment, are RPG games that pride themselves on their focus of realism. With open-world environments and weapon-based combat, Mount & Blade gives players